From the Historian: Touches of Scarlet

Samuel anointing David. David playing before Saul. The Queen of Sheba standing before King Solomon. So many stories in one window. It is the first stained glass window one sees when entering Trinity Church by way of the Copley Square entrance. Even on a cloudy day the window glows. People are drawn toward it and stand in awe of its jewel tone colors and complex storytelling in glass. Surprise is almost always evident when visitors learn the window was designed and executed by a female artist! Her name was Margaret Redmond (18677-1948). A respected artist in her time, she left an indelible imprint throughout Trinity Church. 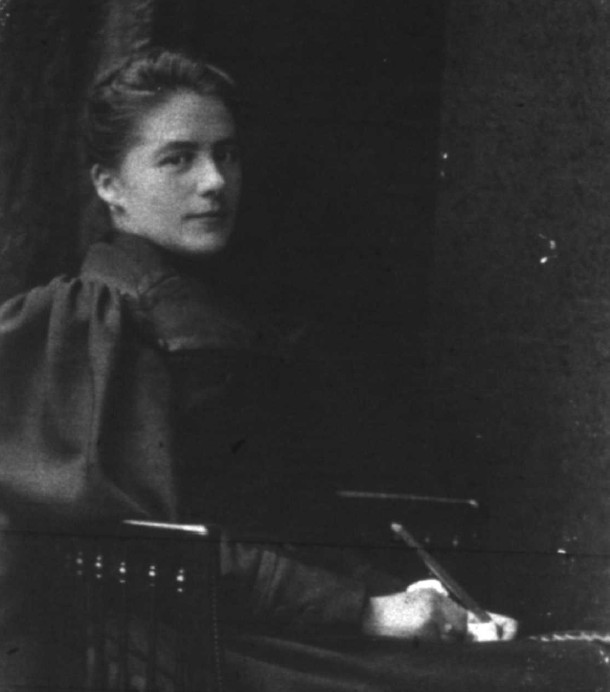 “A plain black gown emphasized her type, which is fine, clean cut and deceptively simple. Her eyes are dark and bright, her hair spun silver and the modulations of her low-pitched voice are peculiarly musical. Denying herself color, she is a master of color.” In 1927, Margaret Redmond was interviewed in her studio at 45 Newbury Street, Boston.

The interviewer Helen Fitzgerald described the space as,

“a veritable treasure trove to the art lover. All about her color glows and flames. … On the walls are sketches of colorful places ... and the light transmuted by the stained glass of her own making fills the room with rays of gold and ruby, emerald, violet and blue so intense that it stirs in the sensitive observer an emotion akin to ecstasy.”

For the 1927 interview and in others, Redmond describes her choice to work with glass quite differently than contemporaries John La Farge or Louis Comfort Tiffany, whose works she admired. As author Elinor Morgan summarized, La Farge and Tiffany designed with glass, whereas Redmond sought to use the glass as her canvas. Born in Philadelphia, Redmond would study at the Pennsylvania Academy of Fine Arts, travel abroad to study in Europe, before returning to the states.

In that 1927 interview, Redmond shared,

“I went to England and France, where I spent two years studying the old glass windows in cathedrals, churches and museums. … My studies led me to many old cities and their churches and cathedrals. … When I had completed my pilgrimage of the cathedrals, I studied with Simon and Mellard in Paris. Returning to this country, I came to Boston and entered the studio of Connick, the famous maker of stained glass, where I made my first window.”

Redmond apprenticed with Charles Connick between 1906 and 1910. Prior to that she bought a farm in Nelson, New Hampshire in an area that would become a hub for artists and intellectuals with Pennsylvania roots. Redmond would maintain a summer home and studio there. Examples of her paintings and stained glass work can still be found in this community. Redmond received a wide range of commissions for work in churches as well as in private homes and businesses. She exhibited her work, including watercolors and oil paintings, at arts and craft shows across the nation.

The 1920s and 1930s were considered her most productive years and this is when she would produce a series of windows for Trinity Church. Throughout her career, Redmond was an innovator. While respected as an artist, she like many women was often ostracized in a male-dominated field. In her studio she worked with both men and women, making a special effort to train young women as assistants in the different phases of the work. In 1931, Connick asked Redmond to list some of her favorite creations. She included on the list the windows produced for Trinity Church. 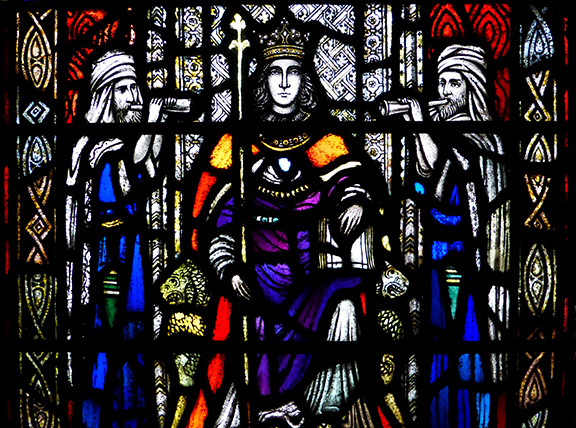 Margaret Redmond’s King David and Solomon windows were commissioned in memory of Helen Eugenia Shelton Cary (1835-1904) and her husband Richard Cary (1836-1862). Richard Cary was the youngest of eight children of Thomas Graves Cary and Mary Cushing Perkins. His paternal and maternal grandfathers were merchants Samuel Cary and Thomas Handasyd Perkins. His father, after graduating from Harvard, worked as an attorney for Perkins and his company’s China trade holdings until the firm dissolved, and then he worked for the Hamilton and Appleton textile mills. As a teen he was sent by his father to look after family interests in Mobile, Alabama. He would eventually start his own business in New Orleans. He was close friends with the actor Edwin T. Booth. In one letter to his wife, he remarked upon his dislike of Booth’s younger brother, John Wilkes Booth. As war broke out, he enlisted in the 2nd Massachusetts Infantry Regiment. Richard Cary died at the Battle of Cedar Mountain in 1862.

In 1927, Richard and Helen’s daughter Georgina Shelton Cary (1860-1933) commissioned Margaret Redmond to design the King David and Solomon window in memory of her parents. Georgina Cary never married. On Census forms that cover her lifetime, the field for occupation is left blank. But if you look at a New England Business Directory produced in 1920, organized by occupation, you find listed under “Artists,” Georgina S. Cary, painter, studio room 408, 30 Ipswich Street. In that same directory, at that same address, you’ll find in Room 301, Margaret Redmond. In Room 411 was painter Lilla Cabot Perry. Today 30 Ipswich Street is better known as Fenway Studios. 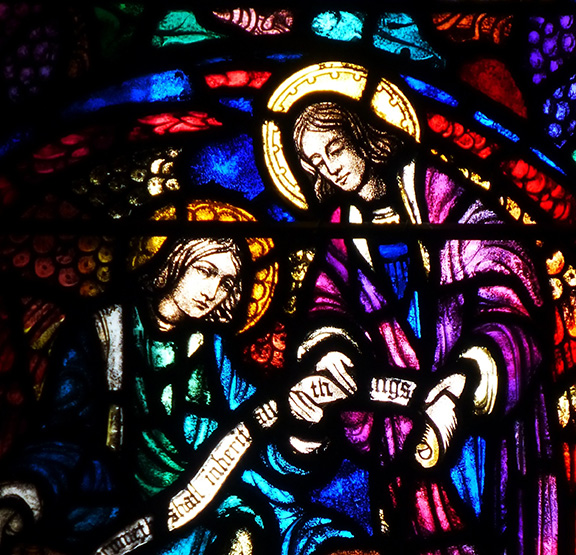 The Lovering Memorial Window
The Apostles and Evangelists

The original contract for the four windows depicting the Apostles and the Evangelists was for $12,800 with the flexibility to spend up to $2,000 more if the artist thought necessary. The windows were commissioned by Mrs. Marian Shaw Sears Lovering in memory of her husband Charles Taylor Lovering. The contract indicates that watercolor sketches were first produced and approved by Lovering, Trinity Church Vestry member and an architect. The four windows were scheduled to be installed in two phases, in 1928 and 1929. 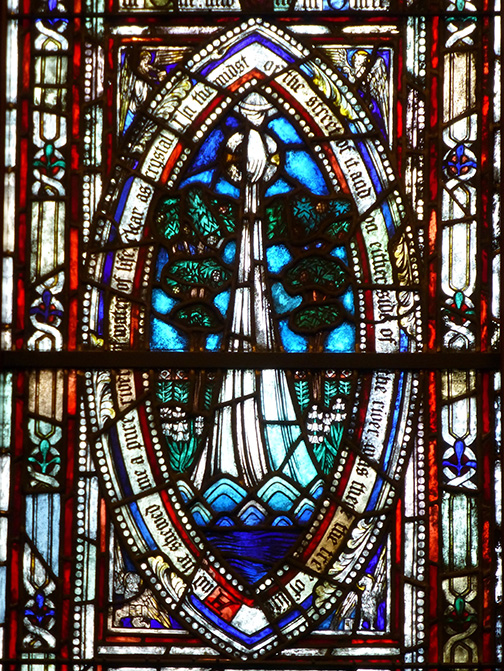 The Bradley Memorial Window
The River of Life

The window is dedicated to Susan Hinckley Greenough Bradley (1851-1929), a descendant of one of the first rectors at Trinity Church, who married Phillips Brooks’ assistant Leverett Bradley. They moved to Philadelphia where Leverett was a renowned preacher, but he died young. Susan resumed painting (which she’d given up raising her family), and that’s likely where she made the acquaintance of Margaret Redmond in the various Philadelphia painting academies and circles.

Until next month,
Cynthia

Learn more about our stained glass windows by taking a tour of Trinity Church Boston.