Edelman’s keynote address was part sermon, part battle cry, part great commission to the people of faith. “When it comes to racial justice and race relations, it’s about time the faith community is the locomotive rather than the caboose!”

“Lots of people like to celebrate and name streets after Martin Luther King,” Edelman said. “Only the few actually want to build a more just society.”

Edelman underscored her exhortations with staggering statistics, saying that 51.3% of black babies are born into poverty and 80% of black children in this country cannot read at grade level in fourth or eighth grade.” She called poverty “racism’s twin.”

Her fiery demeanor as well as her rhetoric underscored Trinity Rector Samuel T. Lloyd’s introduction to the event. “Our gathering here is no small matter,” Lloyd said. “Racism continues to diminish and undermine our entire country.” 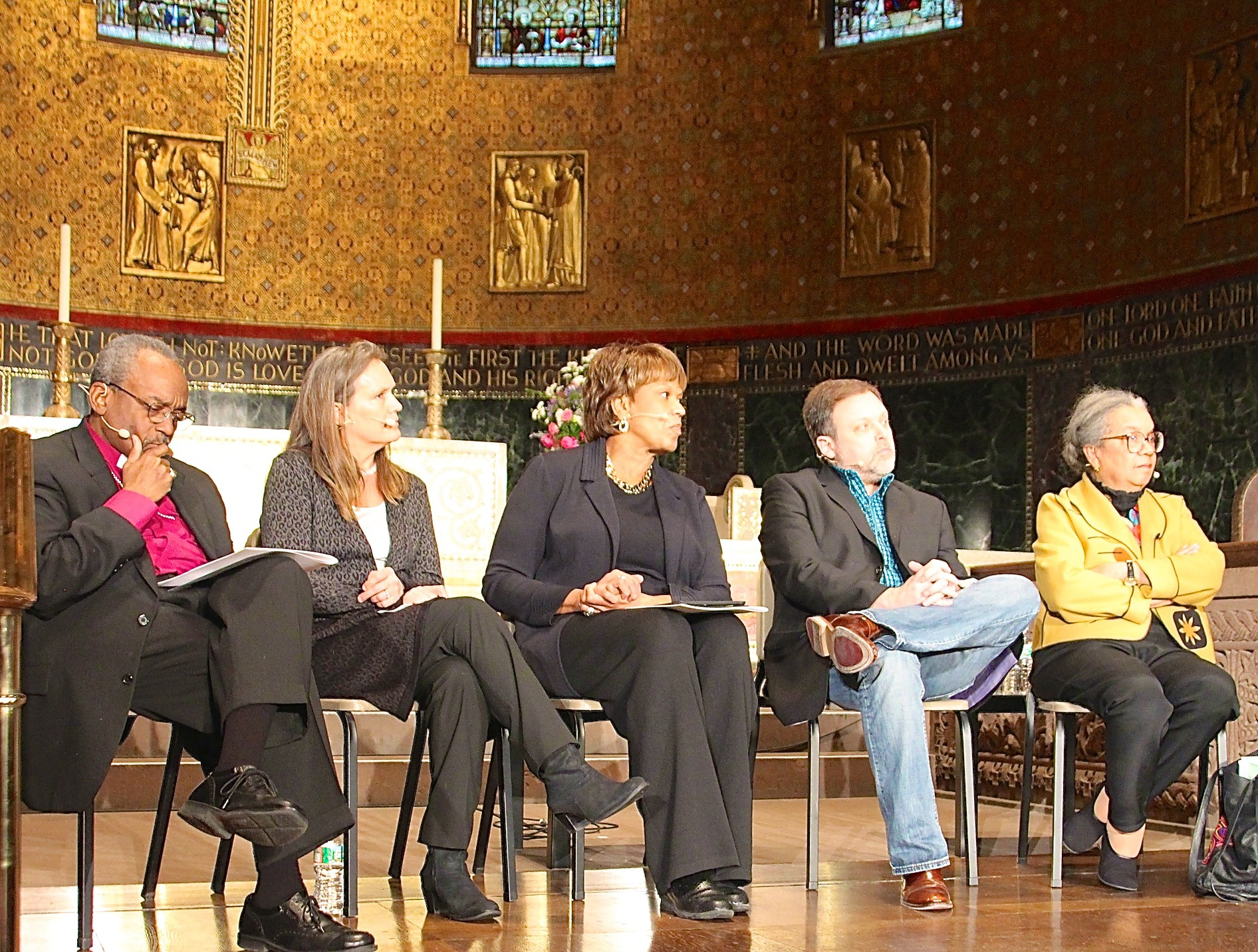 Trinity Church in the City of Boston hosted its inaugural Anne B. Bonnyman Symposium, titled “We Still Have a Dream: End Racism,” on Jan. 18, 2015. It was the first of what the church’s anti-racism team, the organizers of this year’s event, hope will be a symposium series designed to bring current issues to the fore for members of the parish as well as the public. The series is named in honor of former Trinity Rector Anne Berry Bonnyman, a passionate defender of the poor and activist for racial and social justice.

In his introductory remarks, Lloyd also noted that the relevance of the event’s topic as well as its timing was not lost on its organizers. Only a few weeks earlier, crowds had processed through Boston and past the periphery of the parish to express outrage at the inordinate number of black men – and 12-year-old boy – killed recently during altercations with police in Missouri, New York, and Ohio.

In her address, Edelman referenced the “cradle to prison pipeline for poor, black children,” correlating the disproportionate number of incarcerated black men to the substandard schooling they had received as children in poor neighborhoods and the resulting illiteracy rates, despair and joblessness.

Diocese of North Carolina Michael B. Curry, the first African-American bishop of a southern Episcopal diocese, also spoke at the symposium, direct his remarks to what he called “the apathetic Church.”

“When we in the Church are silent, we blaspheme,” Curry said. “Conformity to cultural reality yields to silence all too easily. It’s only by acting ‘crazy,’ being willing to take risks and follow the crucified one, that we will move closer to dismantling racism.”

Curry was the guest preacher during Trinity Church services the morning of the symposium.

Both Curry and Edelman joined in a discussion panel with other speakers, authors and activists. The Rev. Liz Walker, pastor of Boston’s Roxbury Presbyterian Church, humanitarian worker in Sudan and former television reporter, faulted the media for not taking a more pro-active role in calling out the debilitating effects of racism and not helping people understand its connection to prevailing social ills. Walker recalled her own painful experiences of being snubbed and assaulted as an African- American in the predominantly all-white school she attended in Little Rock, Arkansas. She also confessed to struggling with her own issues of hope.

“I’m now pastor of a church located in the midst of all that ails this country,” said Walker. “It’s only two miles from here, but I’ve seen more hopelessness there than I’ve seen on all my trips to Sudan.”

Panelist Debby Irving, author of Waking Up White, spoke to her own awakening as a privileged young white woman in a wealthy suburb of Boston. “I always thought the playing field was level for everyone,” said Irving. “I had absorbed messages from my family and culture that white people are superior and that anger at injustice was not a valuable social norm. I was ill-equipped to make King’s dream a reality.”

Tim Wise, author of White Like Me and other books addressing racial inequality, spoke about the tangible evidence of racism in poor black neighborhoods: “When I visit a new city and see the lack of care and money invested in a neighborhood’s infrastructure – its ruined roads and broken street lamps – I know I’m in a poor black neighborhood. When this is no longer the case, I’ll know that systemic racism has finally died.”

Wise, who has spent years working as an activist and racial justice educator, has trained corporate, government, law enforcement and medical industry professionals on methods for dismantling racism in their institutions.

Boston’s Trinity Church has consulted with racial justice educators and consultants, and spent the last several years conducting an examination of its own 300-year-old history with regards to institutional racism. Not surprisingly, its findings mirror attitudes and policies prevalent among much of secular society in previous eras. Trinity clergy and administrators believe that the act of self-examination provides important context for choosing new and creative directions.

Those new directions are behind the creation of the Anne Berry Bonnyman symposium series as well as other, more grass-roots actions that include the creation, in 2007, of Trinity Boston Foundation – a separate 501(c)3 nonprofit organization comprised of educational, character development and leadership programs designed to help Boston’s youth overcome the odds. In addition, the church’s anti-racism team facilitates a monthly book club, as well as what it calls a “Talking Circle” to advance understanding and dialogue regarding issues of race.