Lions and Peacocks and Doves - Oh, my!
An invitation to discover, examine, and meditate on the plant and animal imagery in Trinity Church

Parishioners Beverly Fisher Crawford and Peter Smiledge have collaborated on a new series for Trinity's blog. Through evocative words and stunning images, they invite us to discover, examine, and meditate on the plant and animal imagery in Trinity Church. Keep and eye on our website in the next few weeks as the story unfurls!

The guiding principle for my photography work is “Look again and look again,” and that principle has enriched both the contemplative and artistic aspects of my life.

When I worship at Trinity, I focus on the symbol of the cross, the symbol that is so central to Christian belief. But some time ago, Trinity parishioner and tour guide Peter Smiledge encouraged me to join him to look again at the abundance of symbols that appear in the lush ornamentation in our worship space. Peter explained that he had become particularly interested in the natural images, some part of the original design and others added over the years. Examining these images of plant and animal life, we see that most have ancient and familiar sacred meaning, but some are more mysterious decorative elements.

So after a few collaborative wanderings around the church, we have done a good bit of photography and research work.  Now we are inviting you to look again with us. 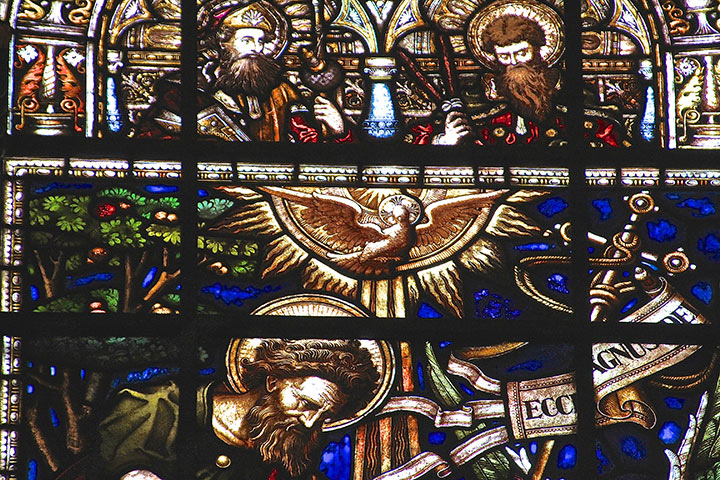 As a Trinity tour guide who has spent countless hours looking at the interior of our magnificent church, I continue to be struck by the scope and detail of its decoration. Often on a Sunday morning while I am waiting for the service to begin, some previously unnoticed decorative element winks out at me from the mural work, the stained glass windows, the carved wood and stone, and even the furniture. I wonder - why is that plant or animal there?  What did the designer want us to think about? How is it connected to our worship? These decorative elements and symbols were meant to be seen - to welcome, to teach, and to uplift worshippers. But, today, much of the imagery which was so carefully planned and skillfully executed by 19th and 20th century artists and artisans remains unnoticed and unappreciated by 21st century worshippers - not because it is not visible, but because we are not looking for it.

So Beverly and I invite you to look again with us as you are waiting for the opening hymn, making your way to the chancel for communion, or listening to the postlude. Our hope is that with this collection of images and information as a guide, you will find new meaning in the elaborate garden of natural images and symbols we have at Trinity.

To even the most casual observer, Trinity Church is rich with Christian symbolism both inside and out. Many of these symbols come from the natural world. 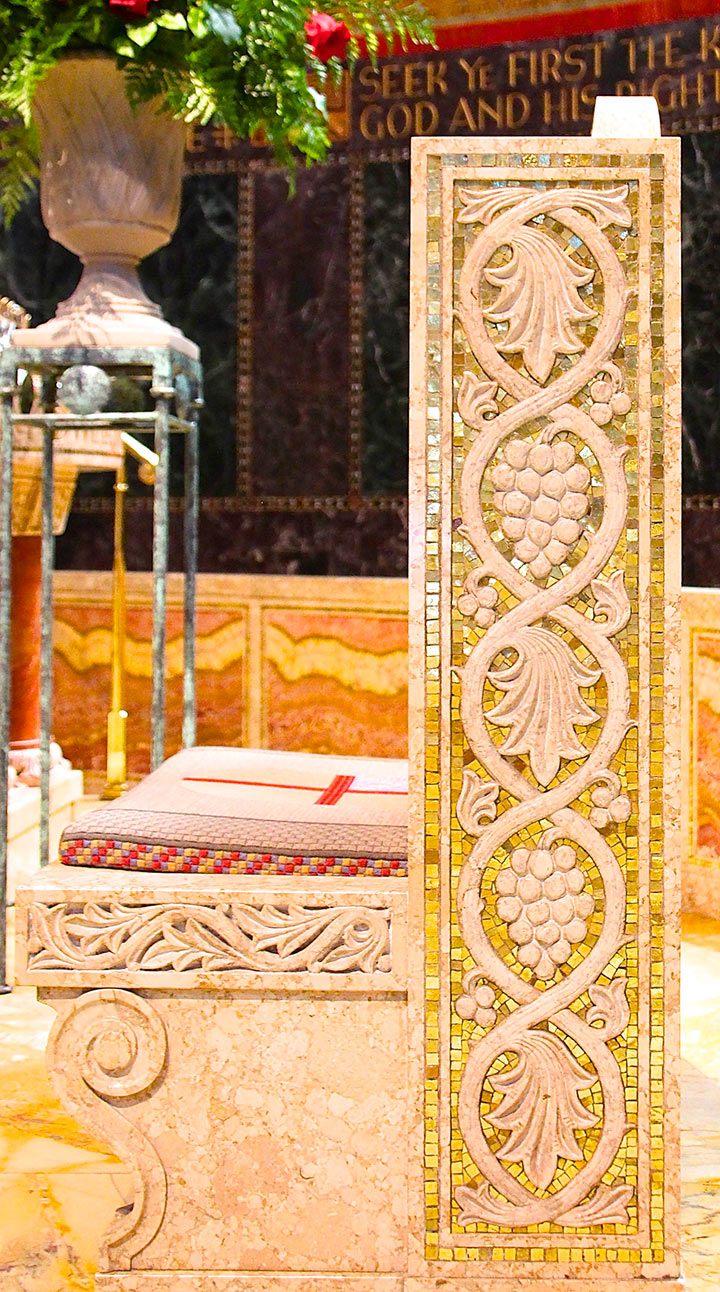 Trinity architect Henry Hobson Richardson echoed many botanical elements from the early medieval Romanesque decorative vocabulary in the original 1877 building. They can be seen everywhere in the architectural details of the church and even in the furniture. Artist and Trinity decorator John LaFarge also made use of many natural motifs in his work throughout the church interior. On the porch, which was added in the late 1890’s, one can find many real and mythological creatures hidden amidst the relief sculptures of Hebrew and Christian historical figures. Early and mid-twentieth century modifications to the chancel of Trinity also included many traditional Christian symbols from nature.

These symbols in and around the church often had their roots in Hebrew and other ancient religious traditions or in mythology and were adopted and reinterpreted by the early Church. Some, connected directly to scripture, serve as illustrations of Christian thought or teachings. Our goal in presenting this series of photographs and text is to help worshippers and visitors to experience Trinity Church in a more thoughtful and complete way.